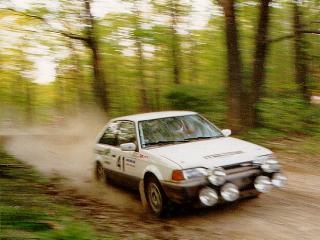 STPR 97:
A view from mid-pack
By Keith Kreisler
Susquehannock Trail Pro Rally 1997, beautiful downtown Wellsboro, Pa. My hometown and just a real nice place to visit . I thought I'd sit down to write out what happened to Chris and myself at STPR this year mostly because events are all starting to run together. 1997 is the seventh time I've run the rally as a competitor - 2 years with Rick Davis and 5 times as a driver with the last two in the Mazda 323 GTX. Everything seems to be getting easier to accomplish, from getting to the event, to passing tech, to getting hotel space - all those things that eat up a lot of anybody's pre-rally time and cause major PMS (pre-motorsports syndrome). That's not to say that I'm not a bit rough before a rally anyhow, especially STPR (just ask Diane). Everything went really well before the rally except that we spent to much time in the tech line as did everyone else. We went out to dinner at the Log Cabin Inn with the whole family and had a wonderful evening.

Rally morning breaks and I walked on over to Mister Doughnut to get coffee and said hello to Ted Mendham, his new wife and Carl Fisher and Mary E. They came down and up respectively to work the rally and they were going to be at the water crossing.

After what seems like forever it's our turn to start. We finally make our way to the Court House and get our out time. This is a really hard time for me every year, being that this is where I grew up. I spend most of my time talking to people I went to high school with, and family and friends that I see about once a year and have to give the five minute yearly update to everyone! We finally get going and I realize that I haven't eaten anything, just coffee, that is pretty normal but I really feel kind of uneasy.

We start stage one nice and smooth but it feels slow and we had one big slide but that was it. I tried to make a much more concerted effort to stay on the gas going down the big hill, and then took it easy through the water. No problems but we had a little scare when there was some hissing noise coming from the #1 plug but it was just water down around the plug and not coming from the head.

At service I finally get something to eat and feel much better now. Stage two is the road from Rexford up to the west side of the canyon. We had another really good stage. We tried pretty hard and really nailed the two hairpins as you turn onto West Rim Road. The first time I ran my Saab I fell off on this stage, after I hit a stump ditch hooking. It's funny how you remember stuff as you drive by the spot.

West Rim road, one of the fastest most flowing stages in the US rally series is really wide and smooth. You spend all your time between 3rd and 4th gear between 60 mph and 90 mph. We did really well the first half of the stage. Just nice and smooth and using all the road and not using the brakes very much. About half way through Chris tells me that the odo has stopped working which is really a mystery because I have never had the odo quit in the Mazda. Its attached directly to the trans., so their is nothing to break.. Also, I realize that the speedometer doesn't work either. So no odo and we are going very fast. THANK GOD FOR ARROWS. Just after an arrow we see a triangle and it's Kurt Theil. He's driven way off the road and rolled his car. We almost miss the corner because I'm looking at Kurt's car. The OK is out and Kurt is by the side of the road. The next instruction that's coming up is the turn onto Fannestock. It's a 90 right onto side road in what Chris thinks is about 0.40. Well, forty doesn't take very long at 90 mph and the corner comes up very fast and we spin on the exit of the corner. I look up and who's there, nobody but Rick Davis himself and he's taking pictures laughing at me. Great! I haven't put a single wheel wrong all day and now I spin in front of people I know. We now proceed to do the slowest 4 point turn known to man for no reason at all and off we go down the hill. The road is now very narrow with about an inch of loose gravel on top of it. Chris tells me that there are two hairpins over culverts coming and I pretty much remember them from last year. We get through the first one pretty quick. Then the second one comes up and I'm going just as slow as before but we slide wide and put two wheels off. We are now high centered on the skid plate. This is exactly the same way we got stuck last year except then we were on a bridge six feet off the water. Luckily this year there were two people at the cabin we had just passed which is at the apex of the corner, and they come running over to help. It's Bill Bradshaw and a friend of his. Bill is the Rally liaison between the SCCA Board of Directors and the Rally community. Bill used to work this stage and my brother Scott and I were part of his crew for STPR 84 through 87. We finally manage to get back on the road after I got out to push and Chris drove it out of the ditch. I'm a little bigger than he is so the weight was helpful. We finish the stage and figure we probably lost three minutes altogether. I can't believe nobody passed us. Another Stage than back to town, bleed the brakes for the first time and than hurry up and wait.

We reseeded 12th on the road - WOW! didn't think I was pushing that hard. But then back out into the woods .

We finish stage 5. For the second time we go by the infamous Kramer Hairpin (my friend Bob Kramer has a cabin just down the road from this turn and we use to go there to watch all of the time). We also pass the Sweets in the Saab stopped after one of those real tight 90's going up the hill. I really hoped it was not the motor as that's the one that used to be in my old Saab. Turns out it wasn't the motor. The final drive chain in the gearbox broke again.

Run stages 6 and 7 and nothing much happens - just really nice fast roads. I now realize that this is the furthest I have ever made it at STPR . After Dean [Fry] blew his motor at the water crossing he went to Germania and serviced for Greg Healey, myself and Scott. I can't thank him enough for that. And it gave everyone else a chance to go out and watch. They all got to watch Bruno roll his car. We just drove by it. At the first service stop in Germania we bled the brakes again and than set out for the next set of stages. This was the only tricky part of the rally because we now have no odo whatsoever. Chris finally convinced me to stop and wait for the next car, which is very nerve racking if you are not quite sure if you should have turned back there or not. The next car through was Tad Ohtake. He drove pretty quickly through the transit and we got to the control with 5 minutes to spare.

We ran stage 8 and this was our third time past the Kramer Hairpin. This time, we had to back up to get around it. This is the only time I had to back up for a hairpin, so we were a little slower than the second time through.

Stage 10 was our downfall - just after the big spectator area (where Bruno rolled). You go downhill to a hairpin. About half way down the hill Sakis had hit a bank and was blocking the road. When we got there Bellaflur had just gotten out of the car and was just in front of the corner where Sakis had spun. We spun trying to get stopped and just barely hit the same bank. Sakis had the whole road blocked. We tried to pull him out of the way but I had almost no clutch left at this point. So we had to get out of the car and push him out of the way. By this time Tad had also stopped. We finally got Sakis out of the way and continued down the stage Chris told me he had kept track and we had lost about 3 minutes.

Now we are trying to finish the longest stage of the rally 18 miles over some very tricky roads, with Tad right behind us. In retrospect I should have let him by, but we were running the same kind of times, afterward Tad said he wasn't upset about it, I just hope we didn't hold him up. We spun again at Harvey's corners and broke a light. After that we just never got back into the grove and our times really slipped off. But hey I finished STPR! For the FIRST TIME! As a driver! It was very nice to get back to town.

Every time I get home from a rally I want to spend more money on the car but this time I had a reason. I sprung for a new clutch, new brake pads and whole bunch of consumables. But the most interesting thing that happened was that there was nothing wrong with the Speedo cables. The center differential had gotten so hot that it had melted the plastic gear that drives the Speedo cable. In turn the Speedo drive had broken the end off of each tooth on the ring gear, which of course got into the pinion gear so they are both trash.

Isn't this a great sport?

So as I write this I'm am waiting for parts so we can go and enjoy ourselves in Maine. See you there! Keith K